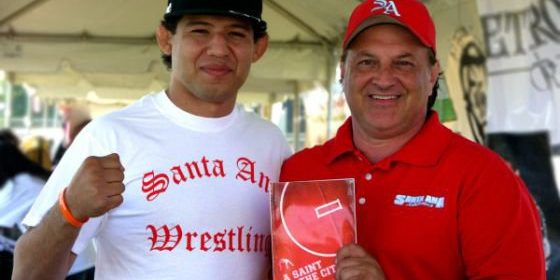 That was not a score. It was a massacre.

It seemed more than mere cross-town wrestling rivals facing off in a hot Orange County gym.

How it ends is just short of a miracle.

In his book, “A Saint in the City,” Glabb says he was standing outside the wrestling room one day back in 1991 when he heard the voice of God tell him to forget about winning and just help his students succeed at life.

Glabb listened to the voice.

He began pounding on students’ doors to wake them up for school and picking them up to drive them to weekend tournaments. If their grades were tanking, they weren’t allowed to dress for practice. Instead, Glabb ordered them to open their books for study hall.

He made them clean up other teams’ gyms after away matches, sweeping floors and picking up trash. And he earned the affectionate nickname Wiggy because he sometimes “wigged out” on the kids in frustration when they were being lazy or screwing up or copping an attitude, launching into fiery lectures.

Score one for the voice of God.

Glabb’s wrestlers began succeeding not just on the mat, but in life, a handful heading off to college each year. Twenty-five of them became CIF champions, 17 became state place winners and two became national champs.

And now one of his former students has made it to The Big Time.

Gilbert Melendez is ranked by mmaweekly.com as the No. 3 mixed martial arts light weight fighter in the world. Had he not wrestled for Glabb, he doubts it would have happened.

“Break ’em and take ’em,” he says, repeating a Glabbism. “I still live by that. I feel like I learned all my work ethic and discipline from the Santa Ana High wrestling room.”

Melendez wasn’t one of the bad boys Glabb had to whip into shape. He was lucky enough to come from a solid home with parents who cared.

But that doesn’t mean there weren’t mountains to climb. The boys Melendez wrestled were, in his words, “better than us,” often from wealthier neighborhoods with parents who spent thousands of dollars to send their kids, from the time they were little, to summer camps, tournaments and state meets.

“But because of what Glabb showed us, I ended up beating them. I was mentally tougher and I wanted it more than them.”

When the bell rang every afternoon, it wasn’t whether Glabb’s wrestlers were going to run the track that day, but how hard, with 45 pounds in each hand. Glabb was a father figure to some, to others a big brother, a teacher, a disciplinarian. “Whatever you needed him for, he could be there for you.”

For Melendez, Glabb was a role model. There were times, he remembers, when he and some of the other serious wrestlers would tell Glabb to kick another kid off the team because he was ditching school or partying, sometimes worse.

Besides not giving up on each other, he taught his wrestlers not to give up on themselves.

“You would be on the borderline of quitting and crying and he would say, ‘Dig deep. How bad do you want it?’”

Bad enough to wrestle with a broken elbow, apparently. That’s what Melendez did for three weeks during his senior year on the way to the state championship.

He didn’t win the title. But he did win scholarship money for San Francisco State. Two years later he found himself barefoot inside a metal cage at a rodeo barn in a town outside Sacramento. It was his first mixed martial arts fight for money (around $400). He won that fight and the next 12.

In 2004 he dropped out of school to train full time. Mixed martial arts fighting pits one man against another in a ring or a cage. Opponents kick, punch and grapple, using wrestling, boxing and jiujitsu techniques to conquer their foe in rounds similar to a boxing match.

On New Year’s Eve 2006, Melendez made a name for himself by beating Tatsuya “Crusher” Kawajiri, then the No. 3 fighter in the world, in front of 50,000 people in an arena in Japan; a huge upset.

“It was a crazy war,” he says. “He’s a real cocky guy and I’m a proud guy. We hit each other so much, I didn’t know if I was winning or losing. But I can think straight while someone’s punching me in the face. If it wasn’t for Scott Glabb, that wouldn’t happen.”

Japanese broadcasters gave Melendez the nickname El Niño because he fights like a relentless storm, wearing down opponents with his “ground and pound” style.

Now 28, Melendez is sponsored by the energy drink RockStar and Motocross clothing giant Metal Mulisha. His latest fight, in which he dominated the Japanese fighter Shinya Aoki, aired in April on CBS for 5 million prime time viewers.

But is it worth getting beat up for a living? Melendez laughed at the question and said he’s never really been hurt.

“Just a broken hand, torn ligaments, my nose is swollen as we speak; broken thumb, cauliflower ear. I’ve hurt my back, I’ve hurt my neck. But nothing bad.”

He’s training daily right now at the gym he opened 18 months ago in San Francisco, El Nino Training Center, to make a run at No. 1.

But he still comes down this way to visit his family. And whenever he does, he stops by the wrestling room where it all began.

“Either I beat ’em up and wrestle ’em or I do a Q and A with them,” he says of Glabb’s current cast of wrestlers.

And if he’s lucky, he catches Glabb wigging out.

“There are rules to the game of life,” is one of the coach’s favorite lectures. “You live by the rules, good things will come your way.”

Originally featured in the OC Register

OC Register – This Winner Doesn’t Think Much About Winning
February 19, 2010